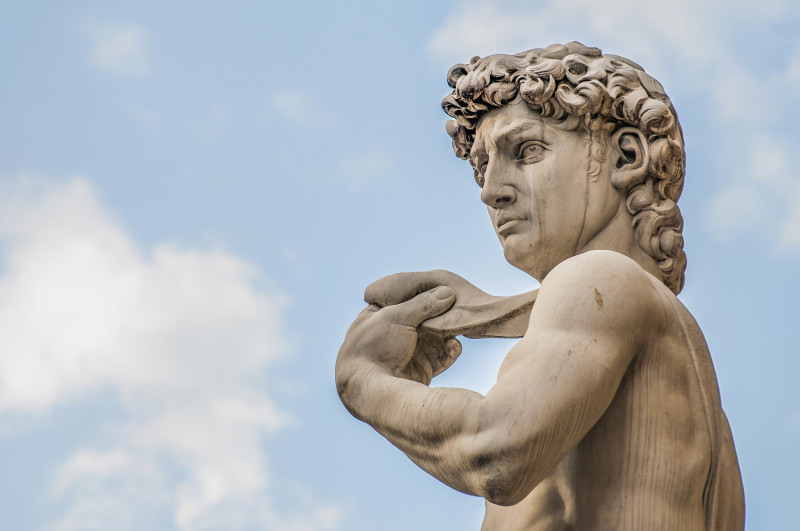 Undoubtedly Michelangelo is the most famous, and next to Leonardo da Vinci, the most complicated among Florentine Renaissance artists; an artistic personality of exceptional creativity with revolutionary results and influence in all artistic fields.
His favorite medium, next to drawing, has always been carving marble. With the statue of David he gave to his native town a unique political icon and attached his name to a new vision of man. This tour aims to offer an introduction to Michelangelo’s biography, achievements and struggles but you can ask us for a special tour to include all the works of Michelangelo in Florence.

Accademia Gallery: Michelangelo and beyond

Ever since Michelangelo’s David was moved to the Gallery from the Piazza Signoria in 1873 this museum has grown to be a synonym for Michelangelo’s work and displays today six sculptures unfolding the tormented path that led Michelangelo from the pure expression of Renaissance ideals to a mature vision of the human destiny.

Around Michelangelo the gallery, attached to the Academy of Fine Arts, reunites paintings, sculptures, icons and musical instruments: the didactic origin of the museum is still evident in the sections of the plaster casts and of the medieval paintings allowing you to approach the practical aspects underlying the creation of great masterpieces.

Walking though the San Lorenzo area we will discuss the unfinished facade of the Basilica of San Lorenzo: one of Michelangelo’s lost challenges and major disappointments. The funerary chapels of the church were built and enlarged through the centuries and a visit to this mausoleum allows you to delve into Medici family history.

In the New Sacristy by Michelangelo, where Laurence the Magnificent was buried, architecture and sculptures are still in the context conceived by the artist. The baroque Princes’ chapel is the best expression of the Medici’s ambition to eternity and glory: the display of marble, precious stones and bronzes is one of the most evocative bequests of the Grand Dukes of Florence.