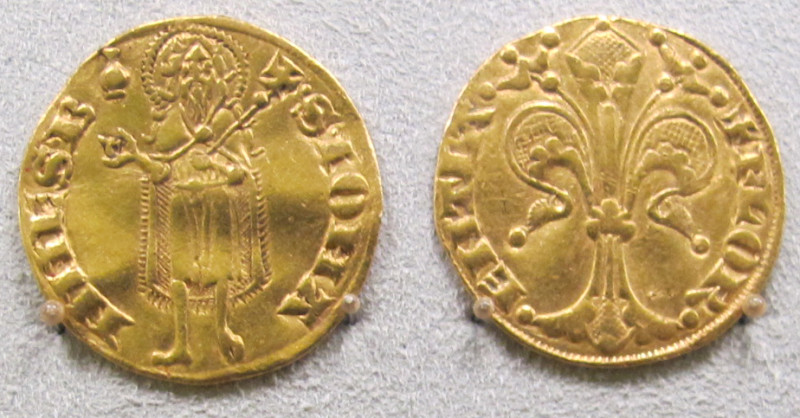 Although they might not have known it themselves, the arts have definitely proved to be the best investment made by the Florentine bankers of the Middle Ages and Renaissance. Not only they endowed the city with a million-making tourist industry, but also they eternalised their families through beauty and prestige. Their wealth and assets might have long vanished, but the history of their unique personalities is still narrated by the chapels and palaces they commissioned. These will be the focus of our visit as they provide a true understanding of what being a banker in Renaissance Florence meant.

Not everyone knows that, in addition to being the cradle of the Renaissance, Florence has also played a crucial role in laying the foundation of the world’s modern banking system. Throughout the 13th century the city established itself as Europe’s greatest financial hub and transformed its currency – the Florin – into one of the main pivots of the Medieval economy. This unprecedented growth would have never been possible without the industriousness of the Florentine corporations and the tremendous ingenuity of its bankers, such as the Medici and the Strozzi, the Bardi and the Peruzzi. Their propensions to risk-taking and their innovative approach set the course of the European economy for centuries to come while their investments in the field of arts and architecture propelled the artistic development of the city to reach unparalleled heights. The palaces and the art they commissioned still amaze visitors from all over the globe. What’s more, they provide those who want to look deeper with an invaluable insight into how these remarkable personalities thought, lived their lives, conducted their business and wrote more than one chapter of the world’s financial history. For instance, Verrocchio’s Saint Matthew is a symbol of how Florentine bankers succeeded in converting their social status from usurers into respectable personalities. Similarly, the Medici Palace is the architectonical embodiment of the tremendously successful banking ethos conceived by the family. No wonder that its design became the model for countless places around the world, including the Federal Reserve Bank of New York.

Most Florentine churches host a myriad of chapels commissioned by merchant families. Depending on your preferred meeting point and your interests we can include any of these gems in our visit.
In Santa Maria Novella you will find those of the Bardi, Rucellai, Strozzi and Gondi families. Its largest chapel, hosting Ghirlandaio’s frescoes, belonged to Giovanni Tornabuoni, an uncle of Lorenzo the Magnificent and a treasurer to the pope.
The Santa Croce basilica hosts the chapels of various banking families like Peruzzi, and Pazzi. Likewise, Cosimo de Medici commissioned a wing of the convent and Tommaso Spinelli, and the treasurer of Pope Paolo II, funded the construction of its fifteenth-century cloister.
The San Lorenzo church and Medici Palace are of course emblems of Medici power and fortune and are as well part of our Medici tour. Even the public library Oblate is hosted in a complex that was originally a hospital founded by Folco Portinari, banker.
The Brancacci Chapel’s stunning frescoes by Masolino and Masaccio are linked to an ambassadorial event centered on the Sultan of Egypt (1422) and its commissioner Felice Brancacci, who was involved in the silk trade.